All posts tagged in: bailout program

Greek Prime Minister, Alexis Tsipras, refuted the idea that his country would need another international bailout. A poll revealed that his government .. 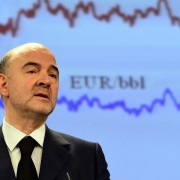 Eurozone Growth Rebound: All EU Members Expected to Grow in 2015

The European Union has raised the growth prospects for the eurozone thanks to low crude prices and the weak euro. Brussels has, however, warned that ..