All posts tagged in: Catalan crisis 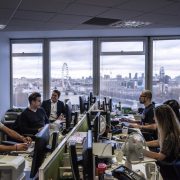 The European Union will boost efforts to counter fake news and disinformation, EU officials said last week amidst concerns about Russian influence in ..