All posts tagged in: chemical attack

„It’s extremely important that North America and Europe stand together because together we are half of the world’s military might and .. 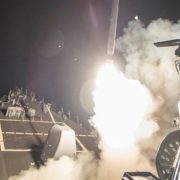 The United Kingdom, the United States and France launched airstrikes on Syria in response to the latest chemical attack near the capital, Damascus ..