All posts tagged in: Christine Lambrecht 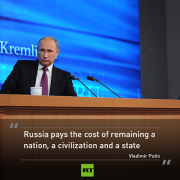 In Russia’s Long Shadow: Putin Will Not ‘Dictate’ Terms to NATO

NATO will discuss Russia’s proposals for the alliance’s military affairs on its eastern border, but it will not permit Moscow to ..