All posts tagged in: EUFOR

The war in Ukraine has underscored the heft as well as the limits of the EU. Putin decided to invade a neighboring country in order to prevent it ..

Dayton at Risk of Unravelling — Who Is Threatening Peace in Bosnia?

The same day Russia began the invasion of Ukraine, another news went largely unnoticed: the decision to double the EUFOR mission’s personnel to .. 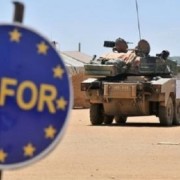 Having been delayed for a couple of months, the European Union has finally approved a EUFOR mission in the Central African Republic (CAR), which will ..