All posts tagged in: Geneva talks 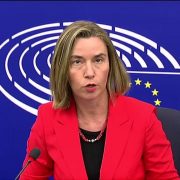 The European Union will continue its intensive support for the UN political process in Syria and will work to strengthen the Syrian political ..

The European Union has condemned the escalation of conflict and violence in the Syrian city of Aleppo. The continuous bombing and the siege of the ..