All posts tagged in: Greens

Joint leader of the Greens Philippe Lamberts has appealed to the UK to respect the post-Brexit legal rights of EU citizens in Britain. His comments .. 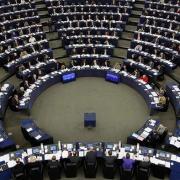