All posts tagged in: League of Arab States

Toughening Syria Sanctions: Assad Under Pressure While His Population is Suffering

The hard sanctions imposed on Syria by the United States and the European Union are taking their toll on the population. Signs of anger against .. 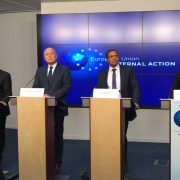 The European Union has hosted the second Libya Quartet meeting as a follow-up to the first meeting that took place in Cairo this year in March. The ..