All posts tagged in: MASEN 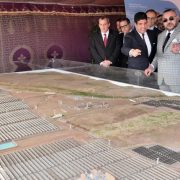 Morocco’s King Mohammed VI has launched the last stage of the development of the world’s largest solar energy plant Noor Solar in Quarzazate, ..