All posts tagged in: Radek Sikorski 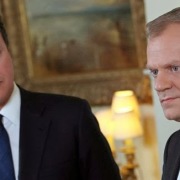 On Tuesday (January 7) Poland’s Prime Minister Donald Tusk promised to veto any British objections to EU laws that would eliminate the access of ..