All posts tagged in: Stevo Pendarovski 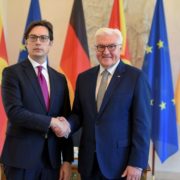 EU member states postponed a decision to open accession talks with North Macedonia and Albania, most probably until September. Germany has to resolve ..