All posts tagged in: anti-Russia

Milan Šuplata and Milan Ni? (The Central European Policy Institute) Russia is currently waging an information war against the West. Rather than .. 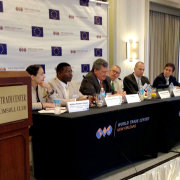