All posts tagged in: Bucharest 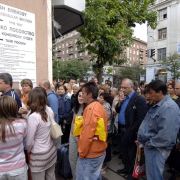 As of January 1, citizens of Bulgaria and Romania can work without any further restriction throughout the European Union. Being the poorest in the ..