All posts tagged in: Dmytro Kuleba 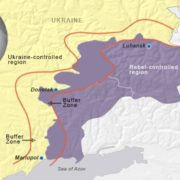 It is “very likely” that Russia will invade Ukraine and it can only be stopped by “enormous sanctions”, Adam Schiff, the ..