All posts tagged in: Muammar Gadhafi

Deep Maghreb: Striking a Balance Between Terrorist and Hybrid Threats

A decade after the start of the Arab Spring, volatility has not abated in North Africa, while the armies are still far from striking a balance .. 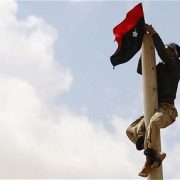 The Libya-Egypt Conundrum: Does the Road to Stability in Libya Pass Through Cairo?

Libya has been recently in the news due to the Manchester bomber who was a British national of Libyan descent. He is suspected to have been ..