All posts tagged in: Nouakchott

Disorder from Chaos: Why Europeans Fail to Promote Stability in the Sahel

Hopes were high when French President Emmanuel Macron announced the creation of the Sahel Alliance at a G5 meeting in Nouakchott, Mauritania in July .. 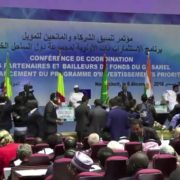 The EU, led by France, is boosting its financial support for the G5 Sahel anti-terror alliance to €1.3 billion. The decision was announced at a ..