All posts tagged in: Sergei Ryabkov 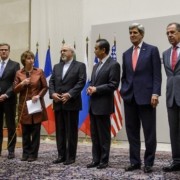 Divisive Iran Nuclear Deal: Welcomed in the EU and US, Denounced in Israel

The European Union and the United States have agreed to relax most sanctions on Iran in exchange for the recent deal on the country’s nuclear ..