All posts tagged in: Victor Orban EU’s Headache: Hungary’s Orban and Serbia’s Vucic Proved They Are Here to Stay

Hungary’s parliament on Monday (30 March) passed a bill that has greatly increased the power of the country’s far-right prime minister .. 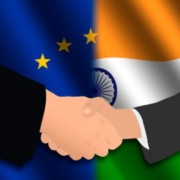 The EU and India upgraded their relationship to level of ‘Strategic Partnership’ at the Hague Summit in 2004, a decade after signing the ..