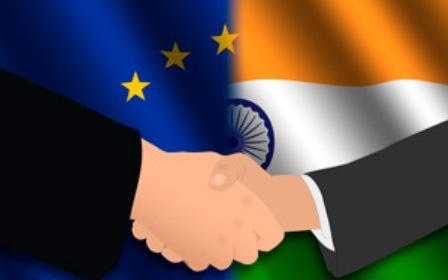 The EU and India upgraded their relationship to level of ‘Strategic Partnership’ at the Hague Summit in 2004, a decade after signing the cooperation agreement in 1994. Over the past decade, the EU and India have experienced continuities and changes in their interactions on global, regional and bilateral levels on the issues of mutual importance. The multilayer political interactions have been increased, but both the EU and India missed several opportunities take crucial decisions to give their partnership a genuinely strategic dimension.
Trade and economic cooperation is core factor in the India-EU relationship. The EU is the largest trading partner of India, but bilateral trade has not realized its full the potential, while India was the 8th largest trade partner of the European Union, accounting 2.4 per cent of its total trade in 2010 as well as in 2011. New Delhi and Brussels could finalize a comprehensive Free Trade Agreement (FTA) after a long and several rounds of negotiations, whereby this deal has the potential to enhance to economic and commercial relations between India and the EU, but both are not ready to concede grounds on some crucial issues. And while economic crisis still lingers in Europe and India is going for national election in a few months, it is unlikely that FTA would be concluded in the foreseeable future. Meanwhile, there are several areas which warrant attention for India and the EU.
Energy is one crucial area of cooperation between India and the EU. The promotion of renewable energy is essential for enhancing energy security, expanding energy access and facilitating the consequent GHG emission reduction. India is blessed with its great geopolitical location which bears a huge potential for solar, wind and other forms of renewable energy. New Delhi has also taken initiatives in terms of policy framework, i.e. National Mission on Solar Energy and is providing incentives for promoting grid and off-grid generation of energy from renewable sources – particularly solar and wind sectors are seen as quite an attractive market in the country. Despite the recent slowdown in the renewable energy sectors, India still remains one of the most attractive markets in the world for the solar energy. However, renewable energy tends to be costlier and needs investment and technological innovation. Investment and advanced technology from the EU can be instrumental in expanding new horizons for India’s renewable energy market.
Research and development is related to both renewable energy and clean technology. Technological innovation would be necessary for proliferation of clean technology and renewable energy. The EU’s advanced scientific know-how and India’s large human resources can provide a fine blend of collaborative research set-up.  If India and the EU prioritize towards people-centric issues, adopt mutually compatible approach and articulate their policy for sustainable solutions, their cooperation can be useful in addressing the challenges of development. It is also paramount that business interests must be compatible with socio-economic and environmental priorities. Corporate sectors should come not only with technological innovations but also promote business innovations to make clean energy accessible to common people at the affordable price in the country, particularly in the rural India.
As India is the most competitive market, infrastructure development also merits attention for cooperation between India and the EU. India is witnessing significant demographics changes and urbanizing at a high pace, which means that the demand for basic infrastructure will definitely grow in future. The country is highly underdeveloped in terms of basic infrastructure development. Robust infrastructure is critical for high growth rate, inclusive development and social empowerment. Thus, there are and will be opportunities for investment. For example, during his visit to India, David Cameron, the British Prime Minister, has expressed interest in cooperating with India for the development of a new Bengaluru-Mumbai Industrial Corridor and other infrastructure projects. The European companies should take notice of the fact that companies involved in infrastructure development are the major contributor to the economic growth. Moreover, in the case of India, investment into infrastructure is one of the top priorities of the Indian government.
Eastern European countries seem to be quite interested to forge broad and multifaceted relations with India. Particularly Poland, the strategically and economically important country of this region, is exploring possibilities for elevating its relations with India to a ‘strategic partnership’ level. As Poland has abundance of coal and shale gas, Warsaw could be an important partner in India’s quest for enhancing its energy security. Not to mention that technological know-how of Poland in coal mining and exploration of shale gas is also highly valuable for New Delhi. Another case in point is the Hungarian Prime Minister, Victor Orban, who during his visit to India in 2013 tried to woo the Indian businessmen to help expand the economic and trade partnership between the two countries. More generally, Eastern European countries are keen to expand their cooperation with India also in areas of the water management, waste management and civic facilities.
Ultimately, apart from economic ties, political and security issues are equally important. Although economic relations have attained primacy in New Delhi’s relations with Brussels, both should forge a flexible and comprehensive approach to bring their partnership up to a higher level. In an increasingly interconnected world, India and the EU should seek a genuine strategic partnership whose viability will in the end depend on their political, strategic, social and economic interactions in the coming years.