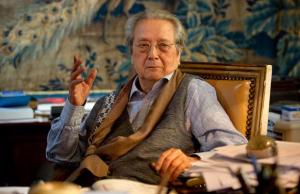 The controversial French lawyer Jacques Verges, who was nicknamed “Devil’s advocate” Verges, died of a heart attack on Thursday in Paris, promoting mixed reactions.
The man devoted his life to defending unpopular causes and high-profile cases including despised Nazi war criminal Klaus Barbie, Venezuelan revolutionary Carlos the Jackal, former Iraqi president Saddam Hussein and his deputy prime minister Tariq Aziz.
The list of his clients also included ex-Yugoslav leader Slobodan Milosevic and Cambodia’s notorious former communist head of state Khieu Samphan, indicted for crimes against humanity over the 1975-1979 Khmer rule.
The champion of extremists also defended the Palestinian cause and the Algerian militant Djamila Bouhired who was sentenced to death in 1957 for planting bombs in cafés and bars in Algiers. After winning her release, he married the Algerian resistant.
But most of his clients lost their cases. His tactics consisted of lashing out at the prosecution and publicizing his defendants cause through launching aggressive media campaigns.
He openly criticized the United States and Israeli policies tagging them as “imperial” powers. He fiercely stood up for the legitimate rights of Palestinian people to defend themselves by all means against the occupier.
Vergas was born in Thailand in 1925 to a father from Reunion Island and a Vietnamese mother. His dad was a French diplomat and grew up on the French Indian Ocean island of La Reunion where he got and adopted his anti-colonial and extremist views.
His life was like a novel, full of ups and downs, exiting and intriguing events with watershed moments and black holes, shrouded in mystery. He loved smoking cigars and wrote some 20 books. Parts of his breathtaking life were portrayed in a documentary titled “Terror’s Advocate”, screened in 2007 at the Cannes Film Festival. Vergas also starred in his own play in France titled “Serial Defender.”