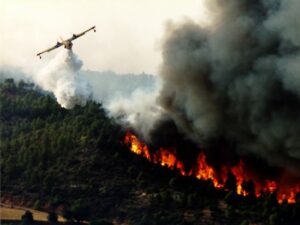 Portugal has declared a ‘state of contingency’ as Morocco, France and Spain also battle wildfires caused by an unprecedented heat wave in parts of north Africa and southern Europe. Thousands of people in Morocco have been evacuated from their homes as firefighters tackle wildfires caused by the recent heatwave, which has brought extreme temperatures of more than 45C. Morocco has been in the grip of a heatwave for a week, which has been made worse by strong winds that are in the forecast for the coming days, complicating efforts to contain fires. Moroccan firefighters, soldiers, police officers and civil defense workers have been battling at least four fires that are ripping through forests in the north of the country. At least 1,000 hectares of forest have been burned in Larache and Ouezzane, according to initial reports. Scientists have said extreme weather events such as heatwaves and droughts, which make wildfires more likely, are linked to climate change.

TUNISIA’S POLITICAL CRISIS AND THE EU — 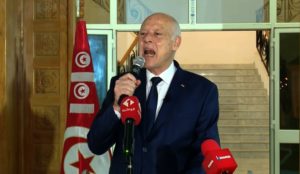 The EU is being urged to take a tougher stance on the political crisis engulfing Tunisia ahead of a referendum in about one week’s time that could entrench the increasingly autocratic regime in one of the Arab spring’s last remaining democracies. Tunisians will vote on a new constitution on 25 July, just over a year after President Kais Saied announced that he was suspending parliament and would rule by decree. The constitution is widely viewed as an attempt to weaken the country’s democratic institutions. In an open letter sent by a group of Tunisia’s opposition parties to the EU’s top diplomat, Josep Borrell, the MPs have urged the EU to be far more active and play a role in a ‘crisis which threatens the stability of the country and the region.’ Opposition parties and civil society groups complain that EU diplomats have shied away from criticizing Saied’s regime, which has been marked by a wave of public protests, some of them violently suppressed, and the arrest and detention of several opposition lawmakers and activists. In recent months the EU has continued to provide substantial financial support to Saied’s government, including additional funds to cover high wheat and grain prices. Many Tunisians see that as a tacit acceptance or support of President Saied, they say. 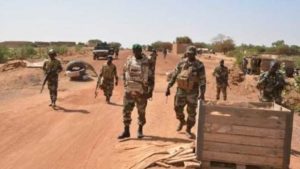 Mali’s decision on Thursday (14 July) to suspend troop rotations by the United Nations’ peacekeeping mission, or MINUSMA, has raised questions about how it wants to detect the terms of engagement — something some analysts fear could backfire. In a fresh blow to the mission, Egypt has told the UN that it will pull its troops from Mali by mid-August, citing deadly attacks against its peacekeepers. MINUSMA, which was established in April 2013 to help the West African nation cope with a bloody jihadist campaign, has been rotating troops who serve on that mission for years. Mali’s military government decision to suspend MUNUSMA follows the arrest of 49 Ivorian troops who arrived at Bamako airport aboard a special flight earlier this week. Ivory Coast had said the soldiers were part of the fifth MINUSMA rotation, but Malian officials described them as “mercenaries” who sought to topple the country’s military-led government. Deputy UN spokesman Farhan Haq has said that Mali’s move would have dire consequences for troops currently serving on the mission since some of the staff should have been relieved several months ago. Mali is currently battling an Islamist insurgency that sprung after a 2012 uprising that has since spread to neighboring countries, killing thousands and displacing millions across West Africa’s Sahel region.