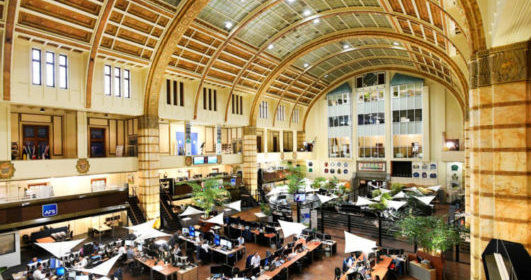 Financial services companies have moved some €1.5 trillion of assets and 7,600 jobs from the City of London to Europe due to Brexit, according to a survey by global auditing giant Ernst & Young. “The days of significant swathes of asset and job relocation announcements appear to have passed and will likely be replaced by the slower yet ongoing movement of people and assets to Europe for compliance purposes,” Ernst & Young noted in its report. The post-Brexit fallout came faster than many had expected, as almost €6 billion of EU share trading left London for other European capitals on the first trading day of 2021. Another bad news for the City came a month later when it emerged that Amsterdam had overtaken London as Europe’s biggest share trading centre, as daily volumes fell sharply in the City and surged in the Dutch capital.
In 2019, when the UK was still inside the EU’s single market, 43% of trading in EU stocks took place in the City, as the world’s biggest international banking and foreign exchange market in London is known. But the first two months of 2021 have seen the proportion plunge to just 4%, according to analysis by the think tank New Financial. The City’s leading position on the global financial stage is not in doubt — but recent events in Europe raise questions as to how far the balance of power may shift from London to other capital cities in the European Union. “You can lose liquidity very quickly, and finance is very adaptive,” says a French economist Nicolas Véron. “So the fact that London has so much liquidity and has had so much liquidity in recent times doesn’t mean that liquidity will stay there.”
The sudden flight in trading activity is the most striking example of financial sector movement from the UK to the EU since the end of the post-Brexit transition period on 31 December 2020. But Amsterdam is picking up business from London not only in terms of the share trading, but also when it comes in euro-denominated derivatives trading. As a matter of fact, London has been losing market access to the EU to the Dutch capital in nearly all categories. Still, as Michiel Bakhuizen, Netherlands Foreign Investment Agency (NFIA) spokesman, cautions, “before we start becoming euphoric about this, Brexit is not good for the Netherlands… In the end, the Netherlands has lost their second trading partner.” But, after all, Bakhuizen points out that the good news is that the country is attractive for financial companies as it helps offer solutions to Brexit-related problems.
More than 400 UK-based financial services firms “have moved something somewhere to the EU in response to Brexit,” according to research by New Financial suggests. Of these, 128 have chosen Dublin, while Paris has attracted 88, Luxembourg 84, Frankfurt 56, Amsterdam 47, and Brussels 10. The think tank’s founder and Managing Director William Wright explains the relocations reveal a clear tendency for cities to specialise across different financial sectors. UK firms had long known that Brexit would deprive them of full “passporting rights”, stripping away the blanket access to operate in the EU they had before. However, so far the EU is also refusing to grant the UK a much lesser form of access known as “equivalence” — given when Brussels considers a third country’s regulation to be as robust as its own. Being deprived of this further hinders the City’s ability to trade unhindered in Europe. Instead, UK firms have to comply with individual states’ requirements. Financial services were never scheduled to be part of the post-Brexit trade agreement, and duly took a back seat while negotiations focused on the likes of fishing rights. The UK has granted the EU equivalence, meaning that EU banks can operate in UK markets. But whether the EU does likewise will be entirely up to Brussels.