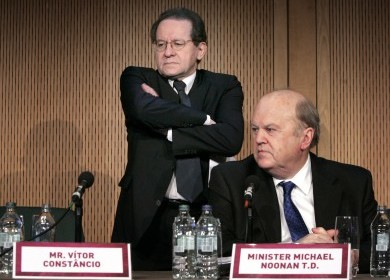 European Parliament MEPs demand that the troika – the International Monetary Fund (IMF), EU Commission, and the European Central Bank – notoriously famous for its bail-out system in the eurozone, should be replaced by an EU-directed mechanism accountable to the EU Parliament. Austria’s centre-right MEP, Othmar Karas, said that any European instrument that does not comply with the community law is provisional. In his opinion, any mechanism like this, and even more so institutions in charge of bail-outs, should be subject to the EU legislation with the EU Parliament being a supervisory organ. Mr Karas is currently preparing a report on the work of the troika with his French colleague, Liem Hoang-Ngoc.
The two politicians, however, disagree on when the troika should be dismantled. Mr Karas explained that were the trio terminated now, chaos and crisis could easily ensue in bail-out countries. He says that the IMF itself does not have sufficient budget to stand alone while the European Stability Mechanism (ESM) still needs some fixing as well as communitarization. The crisis simply cannot be tackled without any instrument whatsoever, he says. Instead, he proposes two alternatives – either turning the ESM into an IMF-like European Monetary Fund subject to EU law, or tasking the ESM and the EU Commission with establishing a new bail-out institution which should be also subject to EU treaties.
Klaus Regling, the boss of the ESM, thinks that dismantling the troika during the Greek EU presidency would mean a true victory for both Athens and Brussels. This statement came out after the reaction of Austrian MEP, Hannes Swoboda, who said he would prefer the troika to be shut down this year because its work is crowding out growth-enhancing policies in favour of austerity measures. The IMF, which initially contributed a third of the money to the bail-out budget, is being rumoured to leave the troika soon following disagreements within the group.