Greek Manufacturing on Rise after 4 years 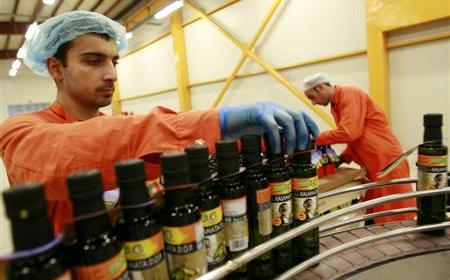 According to the latest figures, the Greek manufacturing and factory activity has experienced an expansion for the first time since 2009 when the country’s debt problems began to reveal themselves and which plunged the European Union into a subsequent crisis. It is one of the most recent signs that Greece’s six-year recession might be bottoming out soon.
Manufacturing, which accounts for 10 percent of the Greek output, logged a rise in the purchasing managers’ index from 49.6 percent in December to 51.2 percent in January. The index rank of 50 percent is an imaginary boundary that divides a recession and growth. Greece managed to achieve a ranking higher than 50 thanks to the rise in retail sales in November last year, which grew for the first time since April 2010. The positive development was moreover helped by the rise in construction activity, which in turn increased for the first time in two years.
The Greek stock market has embraced the new data as reflected by the gain in the ATG index by about 2 percent. Despite positive news, Greece still faces numerous difficulties and unresolved issues with the trio of lenders (EU Commission, International Monetary Fund, and the European Central Bank). The country is expected to be given another bailout package as well as debt relief before it can forget the crisis for good. Economists are of the opinion that the rise in the purchasing managers’ index is not enough to coin it the turning point.
Economist Ilias Lekkos of the Greek Piraeus Bank commented that macroeconomic data had indeed started to stabilize yet their levels are still very low compared to the situation before the crisis. “Before we go from extreme pessimism to extreme optimism we need to be cautions,” he says.