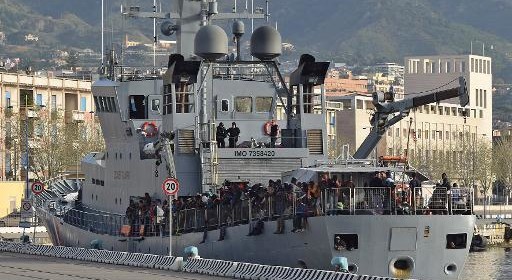 EU foreign and defense ministers agreed on Monday (18 May) to launch a naval mission designed to target migrant-smuggling gangs operating in Libya. Hundreds of deaths at sea, including the drowning of up to 900 on a single vessel in the Mediterranean in April, have compelled European governments into a more robust response. But on the downside, the scope of the naval mission still depends on backing from Libya’s fractious authorities and the United Nations Security Council – where it faces concerns from Russia and China, both veto-wielding members of the Council. Without that authority, EU diplomats say the mission would be much less effective. Another problem are the deep divisions across the EU Member States over how to act as anti-immigrant parties gain support at home.

The plan calls for the mission to be based in Rome and headed by Italian Rear Adm. Enrico Credendino, which would start as a monitoring and intelligence-gathering one but could eventually deploy force at sea and potentially also on the Libyan coast. It will ultimately aim to capture and destroy smugglers’ vessels, embarkation points and fuel dumps. The break-down of law and order in Libya following the collapse of the former authoritarian regime of Colonel Kaddafi has allowed a people-smuggling trade to thrive along its coast, while leaving Europe exposed to an mounting wave of migrants fleeing strife or in search of a better life. NATO Secretary General Jens Stoltenberg also urged the European Union to act, when he warned that Islamic State militants might be “also trying to hide, to blend in among the migrants” in order to get to Europe.

Stressing the need for Libyan authorities’ backing for the mission, Ms. Mogherini on Monday noted that “There is a responsibility the European Union can take, but there is first of all a responsibility the Libyans themselves have to take on their territory and their borders, be they land borders or sea borders.” As part of its wider migrant strategy, in response to the emergency situation in the Mediterranean, the EU Commission also last week introduced a plan to accept 20,000 more refugees over the next two years. The EU executive, among other measures, proposed a system of quota to distribute among EU Member States the burden of housing hundreds of thousands of people while their claims for asylum are processed. At the moment, it is only a handful of states, notably Germany and Sweden, who take the major share. However, the idea appears to be in jeopardy, with the UK, Czech Republic, Spain, Slovakia, Hungary, among others, openly rejecting the quota system.