Brussels to Impose Sanctions on Ukraine? 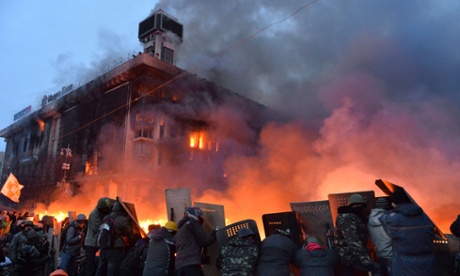 Angry European Union is considering imposing sanctions against Ukraine in response to the most recent apocalyptic scenes on the streets of Kiev. EU diplomacy chief, Catherine Ashton, has called a meeting of EU foreign ministers in Brussels to discuss the ever louder calls for sanctions against Kiev. If sanctions were imposed, it would effectively be a 180-degree turn on the Ukrainian crisis for the EU28.
Ms Ashton said the EU would think more about making its position towards Kiev more stringent especially focusing on punishing those whom Brussels deems responsible for the latest developments. She added that all possible options would be examined including punitive measures against the responsible leadership. There have also been rumours that sanctions might be imposed specifically targeting President Yanukovych just like in the case of Zimbabwe’s President Robert Mugabe who is likely to remain the only person in the country, together with his wife, sanctioned by the EU.
Yet, not all EU diplomats agree that it would be appropriate to sanction Ukraine at this point. They believe that postponing sanctions would provide Brussels with a penetrative policy tool if the situation in the country escalates. EU’s objective, after all, is a political dialogue and all options and channels should be open for now – sanctions are thought to be a means towards the end. The most recent explosion of rioting in Ukraine has left up to 30 people killed as a result of fierce clashes between the police and demonstrators. The unprecedented violence in the country’s modern history has alarmed the international community, which is why the Polish, German, and French foreign ministers reported plans to travel to Kiev on Thursday (20 February). In the meantime, Ms Ashton convened an extraordinary meeting of the block’s foreign ministers on Thursday as well.