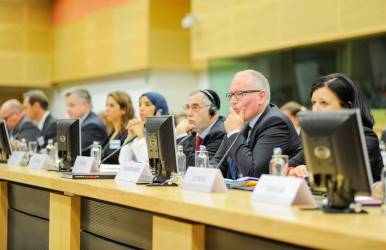 The Area of Freedom, Security and Justice (AFSJ) and the Common Foreign and Security Policy (CFSP), whose predecessor was the European Security and Defense Policy operating within the NATO framework, is the crux of the EU acquis, which has gained significance in the context of the current crisis in Ukraine and the rise of the Islamic State. The two mentioned policies earlier developed on a more informal basis and only the Lisbon Treaty gave them the present form. This last revision of the primary law has considerably increased their significance and enhanced the scope of regulation, though it has not managed to precisely define the scope of AFSJ and CFSP, which means that there can be some overlap between the two policies.

Generally speaking, AFSJ ensures mostly internal security (immigration, asylum, legal cooperation etc.) while CFSP mostly deals with external security (foreign policy, defense etc.). An overlap can occur for example when sanctions are imposed against individuals. The decision whether the sanctions will follow the AFSJ regime or the CFSP regime, is undoubtedly not just a meaningless formality since it determines what role the European Parliament will play in it, whose powers are much stronger within the AFSJ. Potential competence disputes between the European Council and the European Parliament must then be dealt with, as was already the case in the past, by the European Court of Justice.

Some legal experts assign super-constitutional character to the EU acquis and they speak about the so-called multi-stage constitution while others say it is just an ordinary international law. Most experts, however, treat it as a specific kind of international law that does not fit in any of the above-mentioned categories. AFSJ and CFSP are still strongly interconnected with key elements of state sovereignty whereby it is very difficult to doubt their constitutional character. At the same time, we should also note that the EU does not see security only in the narrow sense, limiting it only on the work of the army and the police, but it is putting more and more emphasis on the prevention of a variety of threats, including a myriad of elements ranging from development assistance to environmental protection.

(The study can be downloaded here: http://www.sieps.se/sites/default/files/2015_23epa_eng.pdf)