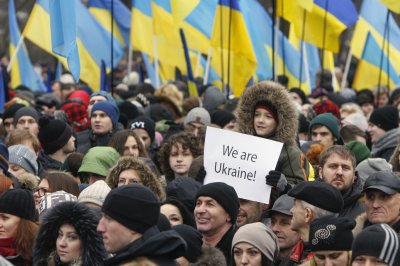 EXCLUSIVE INTERVIEW with Professor Vytautas Landsbergis, Former President of the Republic of Lithuania

EUBULLETIN has talked, in an exclusive interview, with Professor Vytautas Landsbergis, a former Lithuanian President in 1990-1992, who also later served for ten years as Member of the European Parliament. Professor Landsbergis is widely respected as a hero of Lithuania’s independence movement and an outspoken critic of Russia.

EUBULLETIN: Mr. President, despite of the fact that the situation in Ukraine has now seemingly calmed down, many, if not most, observers and experts warn that the long-term Russian strategy of a limited conventional aggression, of ‘Finlandization’, if you want, was not going to change. It’s not only a temporary development but it’s part of a long-term Russian strategy, at least as long as Putin is in power. What is your view on that?

Landsbergis: As for now, you can see that the US is lacking of consistency and of a clear goal but it also reminds me of a previous situation after the Cold War when it was clear that the expansionist and aggressive Soviet Union was a loser and was going out of business, and it was not yet clear what the new Russia under President Yeltsin would be like. Back then there was a strange concern among Western political leaders when the Russian leaders began to repeat the idea that they didn’t want to see Russia weak. We may contribute this concern also to the sophisticated Russian propaganda run by Russian services – you know the Russians, they have people of influence everywhere. This was in around 1993-1995.

At that time, there were, of course, internal clashes in Russia between Yeltsin and the parliament. Then Yeltsin’s referendum came, the parliament announced impeachment to him, he liquidated the parliament, thus managed to stay in power and got this referendum with stronger power for the president and this post-Soviet opposition was ousted. As many say, ‘oh, he executed the parliament, Yeltsin shot the parliament’. But the parliament was claiming the restoration of Soviet Union. Putin was totally against it and totally against the new influence of the Communist Party. So, it happened that Yeltsin won this temporary battle but finally lost the war. The old guard came back and now they are flourishing. Yeltsin and the Yeltsinists, of course, wanted Russia to be a democracy or at least a more democratic state, to be European, but in the end, they lost. There were plotters against Yeltsin, they have been forgiven, amnestied, and they came back and took everything.

EUBULLETIN: But, in fact, it was Yeltsin who hand-picked and appointed Putin first as a Prime Minister and as a hair-apparent to replace him as the President of Russia.

Landsbergis: I don’t know. I may only suppose that Yeltsin was ordered to do it. Maybe it was not his own choice – ‘oh, there are candidates, oh, this is the best one’ – I don’t think so. But Yeltsin may have been told that if you want to survive, if you want your family not to be dispossessed of all goods and not to be put into jail, then you have to do what we order. And we order you to appoint Putin as the Prime Minister and the next day you leave the politics and transfer all your powers to Putin. It was a deal and Yeltsin was left with all his family possessions, not punished, not prosecuted but for Russia this was the end of all hopes for more democratic, more European Russia. Because this old guard came back and any democracy was forgotten – they came to stay forever, but of course, democracy means that nobody is forever.

EUBULLETIN: So, is it what you are saying that this has been the situation in which Russia has found itself ever since Putin rose to power?

Landsbergis: Yes, and this continues until today. As Khodorkovsky has said recently, that in 1998, when there was a financial crisis in Russia and Russia was going to bankruptcy, Russia was asking for a massive $60 billion aid from the West and was not given that. Khodorkovsky is of the opinion that it was a mistake because if the money had been given, then maybe Yeltsin’s semi-democracy would have continued. When this crisis went on, the ‘old guard’ has been accused and together with them the old democracy was blamed for Russia’s economic quagmire. Then they said: ‘This means democracy, this is a catastrophe for us. Russia is not for democracy and democracy is not for Russia.’ (laughing)

And this is deeply embedded in the minds of people – they until now blame democrats for that failure. But maybe the main point that the old KGB or the Communist guard has been making is that the democrats are guilty of the dissolution of Soviet Union. As Putin claims that it was a greatest geopolitical tragedy of 20th century. In Putin’s view, it was not the WWII, Bolshevik Revolution, or the Nazis – all of these were less tragic than the fact that Soviet Union ceased to exist and new countries were given a chance to build themselves into a democracy. Why is this a tragedy? Why is the dissolution of a prison a tragedy? It is a tragedy only for prison guards because they get jobless but not for the prisoners of the former Soviet Union.

EUBULLETIN: In this context, what would you say about the average Russian citizen’s mentality. It does not, generally speaking, seem to be compatible with the Western or European emphasis on democratic values. Talking about the average Russian’s fascination and admiration of the leader – the Tsar – the Russian mentality seems to be much closer to some Asian or African societies that are often rigidly hierarchical, not critical of their leader, not questioning their leaders’ credentials.

Landsbergis: Yes, this is Russian tradition and mentality from times of the Tsar who could not be criticized. It was every so often that when discontent among the public, the proletariat at the increasing poverty was growing, always the ministers were guilty, the government was guilty, but never the Tsar. Tsar is good, ministers are bad. It was then exploited by Lenin, by Stalin – well, Stalin is good while he executed his ministers, his teams and then people applauded. He was on top and untouchable, even treated as a saint.

Maybe about ten years ago, one Orthodox Church claimed they had an icon of Stalin as a saint. I am not sure if you have seen this, you can find it on the Internet, but there are even painted pictures in the headquarters of the ruling party ‘Unified Russia’ where Putin is shown as a saint. He is going to the people like the Jesus from the desert, around him are little ugly beasts and Putin is walking and bringing on his shoulders a young girl and this girl is Russia. And it is serious – when I was shown this picture I said ‘Oh, what a cartoon!’ but they replied: ‘No, it’s not a cartoon, it is (an) icon for a new religion!’ (laughing)