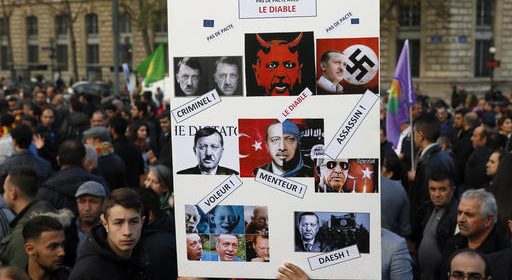 The European Union has condemned the arrest of Kurdish opposition lawyers by Turkey. It has called on Ankara to safeguard its parliamentary democracy including respect for human rights and the rule of law. The EU has also called a meeting of EU national envoys in the Turkish capital following the detention of leaders and lawmakers of the Peoples’ Democratic Party (HDP), which the second-biggest opposition party in the national parliament. The Turkish police also raided the homes of Figen Yuksekdag, HDP co-chairwoman, in Ankara, and Selahattin Demirtas, the other party leader, in Diyarbakir after they had refused to give testimony about alleged crimes linked to “terrorist propaganda”.

A series of detainments has shocked the EU’s leading countries – France and Germany – whose leaders have condemned the recent developments. Romain Nadal, spokesman of the French Foreign Ministry, said that “France calls on Turkey to respect the rule of law and fundamental rights” while his German counterpart commented that “the overnight arrests of politicians and lawmakers from the Kurdish HDP (Peoples’ Democratic Party) represent a further drastic intensification of the situation in the eyes of the foreign minister”. German Foreign Minister Frank-Walter Steinmeier moreover summoned the Turkish charge d’affaires on Friday (4 November) to discuss the detainments.

The EU-Turkey relations have been very delicate in recent months due to a series of issues ranging from the refugee crisis, the migrant deal and the fight against the Islamic State. Ankara has been instrumental in helping Brussels tame the influx of refugees arriving in the block via Turkey and Greece. In return, the EU is providing aid for Syrian refugees in Turkey and has promised to revive the EU membership talks and finally make the visa-free travel for Turkish nationals a reality.