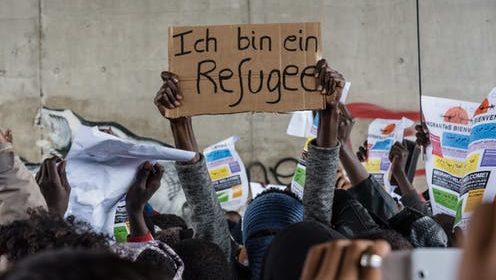 Poland, Czech Republic and Hungary most probably broke EU law by refusing to accept in asylum-seekers at the height of the refugee crisis in 2015, the top EU court’s legal advisor, Eleanor Sharpston, said Thursday (31 October). According to the statement published by the court, Sharpston found that “by refusing to comply with the provisional and time-limited mechanism for the mandatory relocation of applicants for international protection, Poland, Hungary and the Czech Republic have failed to fulfill their obligations under EU law.” The legal opinion issued by the European Court of Justice’s advocate general does not determine what the court will ultimately decide in the ongoing case, but her advice is often influential.
Polish government slammed the assessment by saying that “the most important objective… is to ensure the security of citizens.” According to the government’s spokesman, Warsaw acted “in the interest of Polish citizens and in the defense against uncontrolled migration.” Also the Hungarian government led by nationalist Prime Minister Viktor Orbán hit out at the announcement, stressing that “whether it’s a one-time quota or a permanent, compulsory quota, Hungary declines.” Still, the advocate general decided the three countries’ arguments based on security concerns were unconvincing because they still had the right to bar those individuals considered a threat, and a “spirit of mutual trust and cooperation must prevail”.
In 2015, as Europe tried to cope with an influx of asylum-seekers, many of them from war-torn Syria, the EU announced a temporary mechanism to relocate thousands of refugees from the hardest-hit countries of Italy and Greece to other parts of the bloc. However, Poland, the Czech Republic and Hungary refused the migrant relocation scheme, triggering a complaint against them by the European Commission. While the urgency has now diminished, the principle of relocating refugees and asylum-seekers remains important in the EU as it struggles to come up with a workable new system to distribute migrants among the member states. In September, four countries – France, Germany, Italy and Malta – struck a deal between themselves for the relocation of asylum-seekers, hoping it would serve as the platform for a wider, permanent arrangement for the whole bloc.