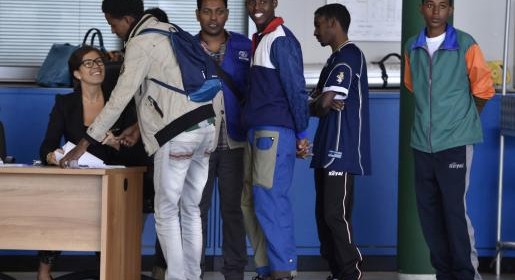 Despite severe problems with Eritrea’s human rights record, the EU wants to liaise with the African country’s autocratic regime and cooperate on a border protection project under German leadership. The country’s dismal human rights situation is the result of a multitude of factors ranging from torture, murder, forced labor and religious discrimination to an indefinite military conscription under which recruits are forced to build roads. The government moreover forbids people to move freely, men and women must stay where they are told and their salaries are so meager that they cannot support their families.

A United Nations Commission of Inquiry on Eritrea concluded in 2015 that the Eritrean government engages in “systemic, widespread and gross human rights violations” carried out in a “context of a total lack of rule of law.” Despite the condemnations by the UN Human Rights Council, the European Union is still seeking to cooperate with the Eritrean regime on the solution to the refugee crisis. As such, the European Commission is to allocate €8 billion in its new Migration Partnership, which will primarily invest development funds in an attempt to put the brakes on migration. As a part of the so-called Khartoum Process, EU-Horn of Africa Migration Route Initiative agreed in 2014, Brussels aims at establishing a continuous dialogue for enhanced cooperation on migration and mobility with many African countries, including some dubious ones.

The EU has declared that it aims to identify and implement concrete projects to address trafficking in human beings and the smuggling of migrants and thus giving new impetus to the regional collaboration between countries of origin, transit and destination regarding the route between the Horn of Africa and the European Union. One of the targets of the Khartoum Process is Eritrean President Isaias Afwerki, who has been in office since 1993 and has fiercely ruled the country as a dictator. Nevertheless, the EU has at the same time earmarked around €200 million for Eritrea to fight human trafficking, protect the border with Sudan but also help build the country’s renewable energy sector.