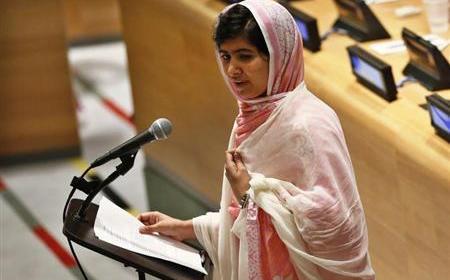 Malala Yousafzai, a 16-year old Pakistani, who was shot by the Taliban for advocating education for girls, won the European Union’s annual human rights award on Thursday. After being awarded the Sakharov Prize, the European Parliament’s prestigious freedom of thought award, she is now also widely seen as a frontrunner for the Nobel Peace Prize.
She started her campaigning in 2009 by writing blogs for the BBC’s Urdu section under a pseudonym where she vividly described how the militant Islamist Taliban prevented girls like her from going to school. Then the Pakistani teenager was attacked last year while on a school bus in the northwestern part of the country, but recovered after medical treatment in Britain. She quickly gained international fame when an increasing number of foreign media outlets conducted interviews with her. Her growing profile attracted the Taliban’s attention and led to frequent death threats. Her book “I Am Malala” is currently the second-best selling book on Amazon.com.
Malala’s victory came as no surprise as she was nominated by the three largest political groups in the European Parliament – the European People’s Party (EPP), the Socialists and Democrats and the Alliance of Liberals and Democrats for Europe. As Joseph Daul, chairman of the centre-right European People’s Party in the European Parliament, explained, “She is an icon of courage for all teenagers who dare to pursue their aspirations and, like a candle, she lights a path out of darkness.”
The Sakharov Prize for freedom of thought has been awarded by the European Parliament each year since 1988 to commemorate Soviet scientist and dissident Andrei Sakharov. Its past winners include Nelson Mandela and Aung San Suu Kyi, the former Nobel Peace Prize winner and opposition leader in Myanmar.
Malala beat other six other candidates on the list for the prestigious prize. Some of them are little-known to the wider European public, such as three Belarusian human rights activists (one of whom was nominated for the second year in a row). Other nominees were Ethiopian journalists Reeyot Alemu and Eskinder Nega, jailed Russian businessman Mikhail Khodorkovsky, the Turkish “Standing Man” protesters and the ‘CNN Freedom Project: Ending Modern Day Slavery’.