Tymoshenko to Be Released Before EU-Ukraine Association Agreement Sealed 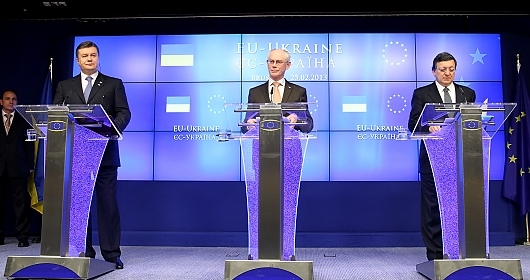 Ukrainian President Viktor Yanukovych announced on Thursday, 17 October, that he would sign a bill – that is already being drafted by the Parliament – allowing the jailed former Prime Minister Yulia Tymoshenko to travel abroad for medical treatment. In 2011, Tymoshenko was sentenced to seven years in prison for alleged abuse of office in a case described as “selective justice” against a political rival – Viktor Yanukovych, the incumbent Ukrainian president.
Yanukovych asserted that there is no law in Ukraine that would allow Tymoshenko to travel abroad for treatment. The President also said that “As soon as the issue is solved in the Parliament and I have the law on my table, you will be able to ask me questions. Certainly, I will sign the law in case the Parliament approves it. Speaking of the mechanisms laid down in the law, probably they will provide [that] the court will decide on the order of the exit procedure with preservation of certain guarantees.”
EU Commissioner for Enlargement and Neighbourhood, Štefan Füle, has said he expected Ukraine to allow Tymoshenko to go to Germany for medical treatment before the 28-29 November Vilnius summit. Western EU countries, Germany in particular, have linked her release to the signing of a landmark EU-Ukraine association agreement, which contains a Deep and Comprehensive Free Trade Agreement (DCFTA), which is expected to link Ukraine to the EU market. Moscow, on its part, has been pressuring Kyiv to join its Customs Union, which is seen as incompatible with the DCFTA.
At the EU-Ukraine summit on 25 February 2013, European Council President Herman Van Rompuy reiterated that one of the three areas where the EU wants to see progress before signing an association agreement (AA) with Kyiv is the problem of “selective justice” – a reference to the imprisonment of former prime minister Yulia Tymoshenko. However, EU countries have been divided on the Tymoshenko case: while some new EU members argue that Ukraine should not be held back just because of the court case of one person who is not by any means completely innocent, some other older EU members see Tymoshenko as an icon of the Orange Revolution.