Brussels to Give UNICEF €320million in Aid 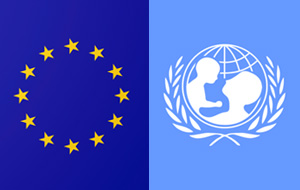 The European Union announced on February 4 that it would donate €320 million to the UNICEF to support the projects that fight mal-nutrition and contagious diseases, which are among the main causes of child mortality throughout the developing world. The budget shall be distributed among 15 countries including Niger, Somalia, Ethiopia, Burundi, and Democratic Republic of Congo with the only non-African country being Timor-Leste.
The EU Commission said that the projects funded by the EU money would focus on improving access to sanitation and potable water. Although child mortality figures have declined significantly from about 12.6 million children in 1990 to the current estimated 6.6 million, the Commissions gauges that still about 18 thousand children die every day from infectious but easily preventable diseases. Brussels’ decision comes unexpectedly due to the mounting pressure to manage to achieve the UN Millennium Development Goals (MDGs) in due time, that is by the end of 2015. Number four goal is to decrease the rate of child mortality for children under five years of age by 75 percent, which is, according to the EU’s forecast, unlikely to be met by 2028 if the current trends continue.
In 2010, the EU started a €1 billion initiative with the aim to hasten the progress towards the MDGs especially with respect to the reduction of hunger and child mortality, which were most lagging behind the remaining goals. In order to achieve the set objectives, the EU wants to focus on the improvement of maternal health and access to sanitation and hygiene facilities, which are strongly linked to poor child health and mal-nutrition. The initiative is financed by the 10th European Development Fund, which is an aid plan for Africa, Pacific, and the Caribbean, including the EU’s overseas territories. Last year, the World Bank announced that probably only 4 out of 21 United Nations’ development goals are to be met in due time.