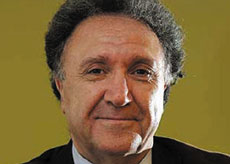 EUBULLETIN talked in an exclusive interview withMr Perviz S. Khazai, who is currently one of the leaders of National Council of Resistance of Iran (NCRI). The NCRI, which was founded in France in 1981, is one of the two parliaments in exile of the “Iranian Resistance”, and also a political umbrella organization of five Iranian opposition political organizations, the largest organization being the People’s Mujahedin of Iran (MEK).

EUBULLETIN: NCRI’s chief, Maryam Rajavi, speaks very critically of Iran’s support of jihadists and extremists in the region saying that “the regime is the godfather of terrorism and the biggest threat to the world peace”. She criticized the Western appeasement and the way the West deals with extremism in the name of Islam. What should the West be doing exactly to do it right, in your opinion?

Khazai: First of all, this is an Islamic problem. Muslims themselves must do something about it. All religions are good, all prophets come with good ideas, ideologies are similar, but these people have damaged Islam. The ideologies must be confronted and contained by Muslim scholars – they should say this is not Islam, this is Fascism based on misusing Islam. The people in the region must mobilize themselves. In Yemen, for example, there is a coalition already and it is supported by the Security Council.
The international community should treat these regimes as the world was treating Hitler or Mussolini, you just cannot let them use diplomacy. Iran pays Boko Haram, it sends ammunition to North African organizations, it heavily finances various fractions in Syria. They are in fact on the soil of Syria, Lebanon, Yemen. I mean you can negotiate with the regime, but you have to use your muscles. I think that the regime is getting closer and closer to getting the bomb. But I am optimistic because the world is starting to realize that the regime is number one enemy to humanity. Look, for example, what they did to Israel and Palestine. Oslo was a wonderful deal but see what happened. Iran managed to dismantle it, it made Hamas and other extremists, they want to demolish the secular system in Palestine.

EUBULLETIN: How substantial and impactful are, in your opinion, the Western sanctions in “taming” Teheran in terms of nuclear activities and its role as the region’s “troublemaker”?

Khazai: Mullahs are importing Porsches, they are getting millions with corruption, nepotism, and seizing control. The oil money goes to finance Hamas, Hezbollah, the Syrian government, Boko Haram, it does not go to the Iranian people. Or take the Islamic movement of Philippines – they are also fighting for the Islamic State. During one event, their representative mistakenly thought that I was working for the Iranian regime, the government in Teheran, not the opposition, so he came up to me and thanked me for the money they had received. I think sanctions are good – the world simply has to mobilize.

Khazai: The Iranian regime is one of the most anti-Semitic regimes in the history. They have always been anti-Semitic. During WWII, the Muslim Brotherhood sent their delegation to Hitler to support his anti-Semitic views and they eventually sent soldiers to Hitler. Iran organized conferences to deny the Holocaust but this Nazi-like style makes no sense. In the Quran, Moses, Mohammed and Jesus, all three of them have top respect. They are mentioned in the Quran as prophets. Then these people come and are anti-Semitic. They make propaganda, exhibitions, conferences. They even get their “intellectuals” to support these insane views. Imagine there was an anti-Semitic conference organized by young Nazis in Stockholm and the Iranian regime sent a delegation there to express solidarity. They want to get united, but we are not united. It is an anti-Semitic enemy number one.

EUBULLETIN: For many Westerners, Islam has become a synonym of terrorism and “Islamophobia” has been on the rise in many European countries. What can be, in your opinion, done to improve the image of Muslim people in the Western society?

Khazai: The first burden must be carried by the Muslims themselves. They have to go to the streets, they must demonstrate. They must stand up to this. It is their image, their identity, their belief is being ruined and jeopardized. Part of renaissance came from the Muslim world, they made a breach at one point of the history. Today it is darkness. Islam needs a reform. Islam needs its “Martin Luther”. I think this is a war that must be waged ideologically. They have to mobilize and say “this is not our Islam”.
The second thing, and this is a thing in which the West has a role to play too – is to support Muslim people who stand up to it. I am so sad about media and especially the media in the U.S. When extremists talk bad about the West, everybody speaks about it. But when Muslim people do gather, they demonstrate, organize conference, we get so little media attention and coverage. The West must encourage Muslims who stand up to this, encourage those who do not accept forced marriages, forced headscarves, skewed inheritance rights towards boys, discrimination of women.
The West must encourage those Muslims and non-Muslim who stand up to this Islamofascism. The West should help the opposition. Our leader, Maryam Rajavi, says that men ruined the history. She is a feminist, but she is also a Muslim, she prays. She is the number one enemy of Islamophobia and says that all Muslims are the same – not divided between Sunni and Shia. I think that one day she can become the true leader of the Muslim world. When representatives of the Iranianregime hear the name – Maryam Rajavi – they get sick and dizzy.

EUBULLETIN: How would you assess the contemporary policy of the European Union towards Iran?

Khazai: In democracy, we have three powers – the executive, judicial, and legislative power. Whereas judicial and legislative powers are fine with us, our problem is the executive power. Governments are a problem, they want to establish economic relation, they want to have diplomatic short-sight interests. Look at Syria, they just lose against the Iranian regime. They do nothing despite the fact that chemical weapons were used there. The West has done nothing yet. Western government simply have to mobilize against such regimes. People who love freedom must hammer their governments.