Child Euthanasia Will Be Legal in Belgium? 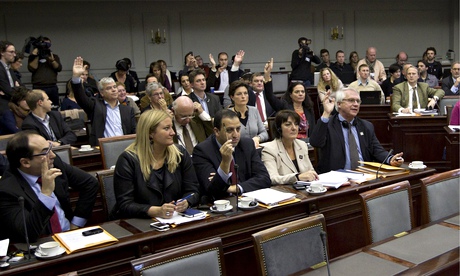 Belgian terminally-ill children could be granted the right to request euthanasia under a controversial bill being considered by the MPS.
According to some experts, the legislation is likely to be passed by the lower House of the Belgian parliament, after it was already endorsed by the upper house.
If approved, Belgium would become the first country in the world to legalize euthanasia without age limits. Under the bill, any request for euthanasia must be approved by the child’s parents and a medical team, and the child must be suffering a terminal illness and a great pain, with no available treatment to alleviate the distress.
However, many argue that it will create a dangerous environment for vulnerable children. Euthanasia has been legal for adults in Belgium for 11 years and according to the latest figures 1,432 people were medically killed in 2012, usually after a lethal injection administered by a doctor.
Child euthanasia, which is supported by three-quarters of Belgians in opinion polls, has triggered strong opposition from many doctors and has united Belgium’s Christians, Jews and Muslims against the law.
Euthanasia carried out by doctors is only legal in three European countries, the Netherlands, Belgium and Luxembourg. Only the Dutch currently allow euthanasia to be administered to children.
Figures showed that 42 Dutch psychiatric patients were helped to die last year against 14 cases in 2012.