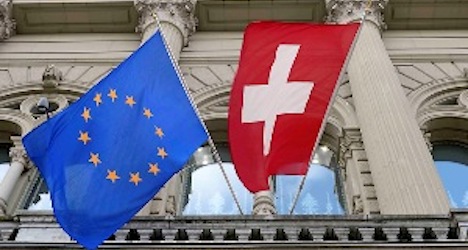 Switzerland’s decision to restrain immigration from the European Union has caused outrage among its member states. After Sunday’s referendum in which 50.3 percent of Swiss citizens had voted against equal rights of EU citizens on the Swiss labour market, Germany said a solution to this problem might be very difficult to find, although Berlin announced that it had respected the outcome of the Swiss referendum. Yet, Berlin added that the referendum “raised considerable problems” as Angela Merkel had previously emphasized that free movement was a “prized asset” for Germany. Viviane Reding added that given the result of the referendum, Bern cannot expect that the EU will keep the benefits of the mutual free trade without accepting freedom of movement.
Germany is Switzerland’s major trade partner and it has benefited significantly from the full opening of the Swiss labour market to EU member states since 2007. As a result, the country’s German community has about 285,000 members, which is the second largest after Italians. Therefore, Germany is worried about the consequences of the referendum for its Swiss community. Germany’s Finance Minister Wolfgang Schaeuble warned that the decision of the Swiss is to generate plenty of problems for Switzerland in many areas. Swiss Foreign Minister Didier Burkhalter is allegedly to visit Germany as his first stop on a Europe-wide tour meant to explain what’s next after the referendum. His French counterpart replied that the EU would definitely review its relationship to Switzerland.
In addition to Switzerland curbing EU immigration, the 28-country block is also facing internal dissatisfaction about its own labour market. Especially westward movement of east European labourers is not welcomed by some EU countries, especially Great Britain. Therefore, London commented on the Swiss referendum that it is a “lesson” to be taken by Brussels. Britain’s David Cameron said that the current situation only reflects that there is a burgeoning anxiety over the consequences of free movement.