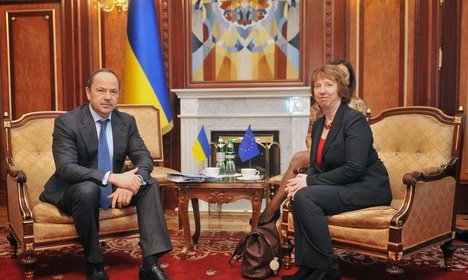 Following the catalytic developments, riots, and clashed throughout Ukraine, the interim government has lately announced that it needs about 35 billion USD in foreign aid for the next two years as well as urgent assistance following the ousting of the ex-President Yanukovych. The Finance Ministry was moreover quick to organize a donor conference, while appealing to Western donors to provide the country with emergency ‘first aid’ that would be badly needed as early as in two weeks’ time. Ukraine’s interim President, Oleksander Turchinov, also warned that the country’s economy was falling into an abyss and was close to a default. Ukraine currently faces a debt of 6 billion USD due to be repaid by the end of this year while almost a quarter of its total debt of about 73 billion USD is due for repayment over the next year and a half.
The country has been involved in ongoing talks concerning macro-economic assistance both with Brussels and Washington as well as other international donors for about two years. The Association Agreement between Ukraine and the EU, though finalised, was not signed and ratified in December last year, since the ratification of the treaty depended on Ukraine’s “respect for common values and the rule of law with an independent judiciary” and notably on the EU demand for Ukraine’s former Prime Minister Tymoshenko to be released from prison. At the same time, Moscow subsequently offered Kiev – as part of its favoured ‘carrot-and-stick’ policy – a bail-out of 15 billion USD as well as a substantial decrease in gas prices as a ‘thank-you’ for not signing the pact with the EU. At that point, against the backdrop of the bloody demonstrations which finally led to a changed political configuration and foreign policy orientation of the country, not much was heard about Ukraine’s economic troubles and possible collapse. One might then be forgiven for thinking that Moscow’s offers were simply more enticing and seen as more beneficial for Ukraine than the deal with strings attached presented by Brussels.
Yet, this scenario does not appear to be very likely now when the hope that Russia could buy some of Ukraine’s debt is much less likely as these bond purchases were put on hold during the Euromaidan protests. The economic outlook does not look too good either unless Kiev succeeds in getting some foreign currency, as also a senior economist of HIS Global Insight commented. In the meantime, Standard & Poor’s ranked Ukraine with CCC-, which is only two notches above default.
The major and most imminent problem facing the Ukrainian economy is a chronic shortage of foreign reserves, which have been plummeting for quite some time. According to various estimates, the country has less than two months’ imports coverage. Not only cash is in short supply but also banks are getting increasingly fragile. To make things worse, Russia has now the power to demand payment of money owed for natural gas supplies, which could have ominous consequences for Kiev at this point.
If the money comes from the EU or the International Monetary Fund (IMF), it is not going to be cheap because both organizations and especially Brussels are beginning to be tired of a number of consecutive governments not being able to deliver reform. It is expected that Kiev should finally embark on extensive economic reforms including spending cuts and liberalization of gas prices, which would in practice mean their doubling and thus hurting the living standards of Ukrainians. Nevertheless, Kiev should definitely kick off its reforms as soon as a new government is formed because the country has already burnt the international creditors and especially the IMF since it has repeatedly failed to fulfil its reform conditions in the 2008 and 2010 bail-outs.
The potential of Ukraine’s economy is not small. The country has benefited from relatively well educated and skilled population already during the times of the Soviet Union, when it also developed its metal or chemical industries, defence industry, in addition to being Europe’s emerging agricultural superpower. Ukraine has however – and unfortunately – suffered from a fatal economic mismanagement as well as a complete lack of sound economic governance.
The question why the EU should finance Ukraine’s recovery is strongly linked to the question why Ukraine matters for the EU at all. This question has not been sufficiently asked and the truth is that member states have not engaged in a deep discussion over the strategic importance of Ukraine for the European Union. Hence, the relationship to Ukraine seems to be shaped by a kind of red-tape-like foreign policy of association agreements with basically every one. Yet, Ukraine did not become a second Poland struggling to get its place back home in Europe, as many wanted to see it. This time, however, if Ukraine again fails to satisfy the need for reform and for making good use of the EU money, its place on a Brussels’ strategic map might be shelved for quite some time.