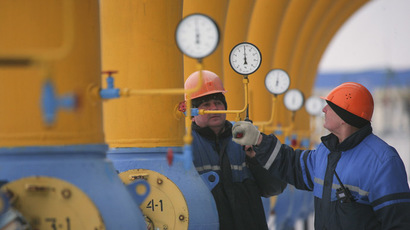 The decision of the European Union to help out Ukraine fight its energy battle with Russia by reversing gas flows has been described as “illegal” by the gas giant Gazprom. Gazprom’s CEO, Alexei Miller, said that gas reverse flows from the EU to Ukraine defy an EU’s plan to support Ukraine’s pro-European government to face Moscow’s strategy of bringing Kiev down by its energy politics.
Mr Miller allegedly emphasized that reverse flows were often physically impossible and even if they were technically feasible, they are simply illegal. He said that Gazprom doubted very much that reverse flows from Slovakia to, for instance, Kiev, Kharkov, or Donetsk, were physically conceivable. Gazprom’s CEO furthermore stressed that the pipeline simply cannot sustain gas flowing in both directions at the same time and that Kiev had no right whatsoever to control their gas in the Ukrainian pipeline. He added that as Gazprom terminals are located in Europe, the company will look into the issue carefully to find out whether this plan has a legal background. Mr Miller also warned European firms to think twice about consequences of such an illegal action.
At the moment, Ukraine is receiving reverse flows from Hungary and Poland, while a contract with Slovakia is currently being prepared as well. Thus, the country is still basically getting Russian gas but at a lower price than the one it would have to pay Moscow till the end of this year. The current price of gas that Ukraine has to pay to Moscow has been increased by 80 percent to 485 USD per tcm since Viktor Yanukovych was toppled. Therefore, Ukraine’s incumbent Prime Minister said during the past weekend that his country might receive up to 20 billion cubic meters annually or reverse gas from the three EU countries.