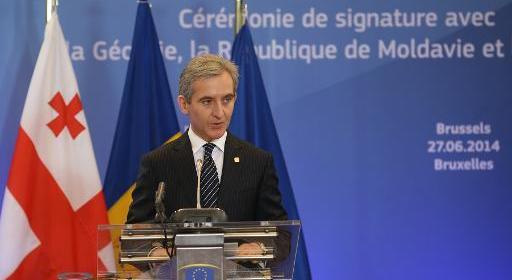 Russia has forbidden importing meat from Moldova after the country had signed and ratified an association deal with the European Union (EU). Moldova decided to strengthen its relations to the EU along with Ukraine and Georgia last week and managed to ratify the signed agreement in a record short time. In response, Moscow banned exports of all Moldovan processed beef, pork, lamb, and horse meat on the grounds of “crude violations” of the Customs Union’s regulations led by Moscow. Russia instead signed a new cooperation deal with the disputed Transdniestr region. Brussels condemned the step yesterday, which the EU described as retaliation against the Romanian-speaking region for trying to establish closer relations with the EU28.
Moldova’s decision to sign a deal with the EU surprised Moscow which hoped to include the country in its Customs Union along with Kazakhstan and Belarus. Russia had allegedly warned Moldova that there might be serious repercussions in case it decides to follow the Ukrainian example. In Ukraine, ex-President Yanukovych was ousted when he decided not to go for a deal with the EU. Political analysts agree that there is a direct link between the Russian ban on Moldovan meat exports and the signature of the deal. According to Azhdar Kurtov, “Russia sees the signing of the association agreements as a serious challenge to its influence and economic stability on domestic markets”. Russian leaders signed seven deals with the Moldovan separatist region of Transdniestr which cover all aspects of economy and trade. Yet, Moscow omitted the issue of Transdniestr’s independence as it does not want to further fuel tensions with the West over the region.