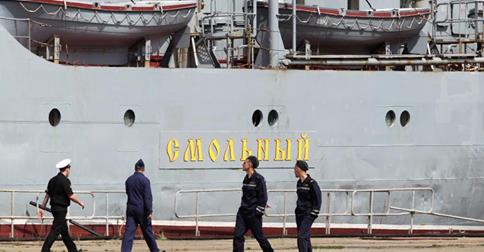 The idea that the European Union should purchase two French chopper-carrying assault ships instead of allowing France to deliver the vessels already sold to Russia is garnering support after Brussels banned arms sales to Moscow and restricted trade in selected industries. Edouard Tetreau, the chief of the think tank European Council on Foreign Relations, said that this idea had been “gaining traction in Paris as there are diplomats in Paris who start to see that as a possibility.” Mr Tetreau added that the EU had “ample financial means to buy the contract”. It was the German Navy that suggested that the EU could buy the Mistral vessels because such a purchase is too big for a single nation. An alternative would be NATO, which has both mandate and the necessary infrastructure.

As a follow up to the crash of Malaysia Airlines Flight 17 in eastern Ukraine that killed almost 300 people, the West imposed tougher sanctions on Russia including a ban on arms trade, technologies for deep water Arctic shale oil drilling, and a restricted access to Western capital markets. France is trying hard to come up with a solution that would minimize a possible negative impact on the country’s 1.6 billion USD deal with Russia to deliver the Mistral-class warship. Under the contract, signed in 2011, Paris ought to deliver the first vessel by the end of this year. The French government is making efforts to protect its shipbuilding sector from the repercussions of the West-imposed sanctions on Russia. The country’s foreign minister, Laurent Fabius, said that the cabinet would make a decision in October whether to continue with the ship deliveries.