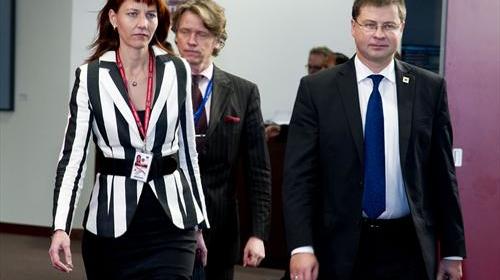 Moscow condemned on Friday (21 November) recent comments made by the Latvian Permanent Representative to the EU, Ilze Juhansone, in which she sought to denounce Russian propaganda. The senior Latvian diplomat made these statements at a public event organized by the European Policy Centre, a Brussels think tank, while presenting the priorities of the upcoming Latvian Presidency of the Council of the European Union starting on 1 January 2015.

When asked in the Q&A session to comment about news of increased Russian propaganda Latvia, which has the largest ethnic Russian population in the whole European Union, Ms Juhansone stressed that “With the latest developments in Ukraine, we felt a massive increase of propaganda on Russian-speaking channels” while adding that it was a Latvian government’s responsibility to provide alternative views on events currently unfolding. Earlier in April, Latvia joined Lithuania in banning Russian state TV broadcasts because it found that several of its programs about the Ukraine crisis were prejudiced and biased openly favoring the Russian position and thus not in the Baltic nation’s security interests.

The Latvian diplomat also bluntly slammed what is widely seen as Russian propaganda by saying that “Unfortunately, when I’m looking those [Russian] channels, my feeling is that I’m back to 1980s,” while specifically referring to their speakers who used the same expressions as in the Cold War era and called each Ukrainian representative as “fascist, Nazi and so on”. However, Ms Juhansone also admitted that not all of the ethnic Russian population buys Russian propaganda, as in fact it happens in other countries. Therefore, as she stressed, it is crucial that “We [Latvian state] try to provide alternative views.”

Aside the EU-Russia relations, the public event also highlighted the overall priorities of the Latvian Presidency, which are expressed in its logo: “Competitive Europe, Digital Europe, Engaged Europe”. It is obvious that in all these fields, it is the Commission that was very much in the lead, and the Presidency would play a supportive role.