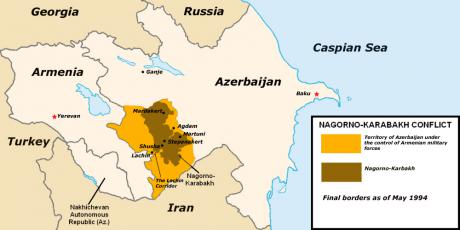 Following the recent renewal of skirmishes between Azerbaijan and Nagorno-Karabakh regarding the number of fallen soldiers in last week’s clashes, the European Union said that the current status quo in the disputed region was “unsustainable”. The violence erupted again with each side claiming that the other side had initiated the fighting. Armenian and Azeri forces attacked a number of villages close to the border between Armenia and Azerbaijan. Brussels has moreover evidence of the use of mortars and heavy weapons by both sides.
Since the beginning of the fighting, there have been a number of casualties but authorities cannot agree on the precise number. The Azeri Ministry of Defense said that three of its soldiers and seven Armenian-backed soldiers had been killed. There are also many wounded. However, the Ministry of Defense in Nagorno-Karabakh announced that more than 10 Azeri soldiers had been killed adding that it had not suffered any casualties.
Nagorno-Karabakh is internationally recognized as part of Azerbaijan but most of its region is governed by the Nagorno-Karabakh Republic, a de facto independent state but with a very limited recognition. Azerbaijan has not exercised political authority over the area, which is crisscrossed by gas an oil pipelines since the establishment of the Karabakh movement in 1988.
Out of concern that a wider conflict might break out in the South Caucasus, the European Commission commented that “the peaceful solution of the conflict remains a priority for the EU”. The Commission embraced the meeting between the Foreign Ministers of Armenia and Azerbaijan held on 27 September in New York. Maja Kociajancic, spokesperson to EU foreign affairs chief, Federica Mogherini, further commented that the EU called for “an immediate de-escalation of violence” reminding that both sides “should especially respect the ceasefire and the Geneva conventions”.