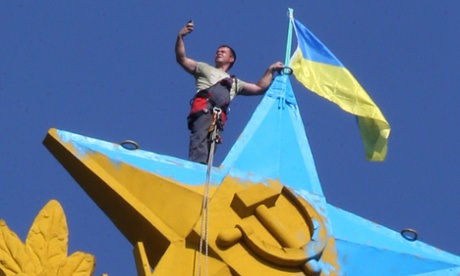 Strained political relations between Russia and Ukraine successfully conceal the bitter economic truth beyond the eastern Schengen border. While the main focus is still pinned to the geopolitical dimension of the conflict in Eastern Ukraine, economic insecurity and uncertainty is looming large over the country of almost 45 million people. Ukraine’s output is falling, external deficit is exploding, private capital is fleeing, and the decline in GDP is twice as high as predicted by the IMF in April. Exactly at the time when financing is a matter of ‘life of death’ for Kiev, the costs of borrowing keep on soaring.

While the European Union seems to be preoccupied with sanctioning Russia and dealing with the “ethical” dimension of the conflict in Crimea, rather than facing the dire economic reality of its eastern neighbor, the IMF approved a loan of $17 billion already earlier in April this year. The ultimate goal of the loan was to avert default and stabilize the economy. Forward eight months and the Fund has predicted that the Ukrainian economy will need an additional €19 billion next year. The IMF naturally hoped that in the meantime, Russia-Ukraine tensions would ease, which would allow for more investment and lending. However, the situation has not changed for the better and thus only few financing opportunities have opened for Ukraine. The more difficult it is for Kiev to access external financing though, the more likely it is that the country will have to face a debt default.

Ukraine has naturally received also some macro-support from the EU, including in June the first tranche worth about half a billion euros and a few days ago the country obtained an additional €260 million. The EU financially supports mainly a program of reforms in the areas such as energy sector, financial sector, trade, taxation, and anti-corruption. Under the current circumstances and the EU-IMF’s support, it is very likely that Ukraine’s debt can be sustained only if the Fund further extends Ukraine’s conditional loan. Yet, if Ukraine does not pass the solvency test, it will be more difficult to qualify for IMF financial aid. In such a case, debt restructuring would normally be recommended but the overall uncertainty surrounding Ukraine makes things more complicated. Therefore, the IMF has suggested that the Ukrainian debt could be “re-profiled”. Under re-profiling, principal is preserved but the maturity of bonds would be extended. Kiev could then introduce reforms while receiving finance from the Fund, which would provide Ukraine with more time to pay off the debt without facing an imminent risk of a default.

Unfortunately, pouring money into the Ukrainian economy will not be enough. A truly strategic plan is needed to avert Ukraine’s economic disaster and investment must be at its core. Ukraine will only thrive when international investors come back but they are still reluctant, especially after the Standard & Poor’s report in September that Ukrainian banks are among the riskiest in the world. Yet, investment is paramount now, especially in infrastructure in eastern part of the country, where the conflict caused million-dollar damages and losses. Nevertheless, investors are slowly realizing that the country’s debt will be either restructured or “re-profiled” sooner rather than later. This is a good sign and foreign donors should consider debt relief and low-interest loans to further boost the nascent interest of investors in the country.

The focus of the reform financed by the IMF and EU money should generally shift towards boosting investment and well-targeted aid. Certainly, although other areas such as anti-corruption legislation and democratic change are under normal circumstances equally important, when the economy not functioning well, the money spent on these sectors will most likely be wasted. Greece has provided a lot of evidence that a slumbering economy can swiftly lead to social unrests and other malignant societal developments. Therefore, financial assistance to Ukraine should first and foremost focus on getting the economy back on track and only when it is stabilized, the West should help drive Ukraine’s social and democratic change.