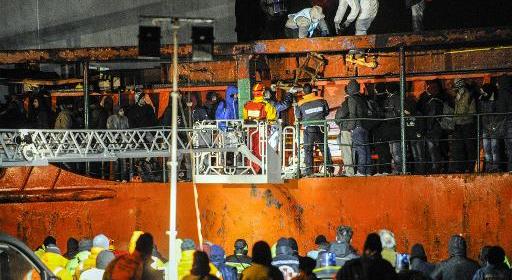 Italian authorities took control Tuesday of a cargo ship said to be carrying as many as 700 illegal migrants after its crew disappeared and set the autopilot on a programmed route to crash into the Italian coast. The Blue Sky M, reportedly with hundreds Syrians and Kurds aboard, has now docked in the Italian port of Gallipoli, official sources said. Photos posted by the Italian Red Cross show the cargo ship docked in the port with hundreds of people crowding the deck. According to eyewitness reports, scores of people deemed to be refugees were seen disembarking from the vessel while some others may have reportedly be dead.

Italy and Greece have had to deal with an influx of tens of thousands of migrants and refugees, most fleeing conflict or poverty in the Middle East, Africa and Asia, who set off on boats with hopes of reaching Europe. The smugglers who organize these illegal trips across the treacherous seas of the Mediterranean often abandon the ships before they reach shore to avoid arrest. The clandestine voyages commonly originate in Libya but this ship is said to have started in Turkey. The UN High Commissioner for Refugees, Antonio Guterres, has recently warned that his agency will face enormous shortages in 2015 as it struggles to deal with the sharp increase in the number of migrants driven from their homes by conflict and poverty.

The first suspicion about the Moldovan-flagged Blue Sky M came after a passenger sent a distress call earlier Tuesday (30 December) when the vessel was off Greece. When Greek authorities subsequently dispatched a navy frigate and helicopter, the captain said the ship wasn’t in distress and in need of any assistance. When on its course toward the Italian coast, Italian port authorities scrambled two helicopters as a precaution, whereupon a team took control of the ship after determining there no crew was to be found. Italian coast guard spokesman Cmdr. Filippo Marini explained that this action “avoided disaster” by interrupting the programmed route set on the autopilot that would have had the ship crash into shore.