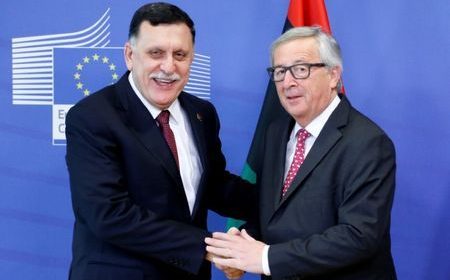 For the European Union, efforts to stabilize Libya are now more important than ever – such is the main conclusion of yesterday’s (6 February) Council conclusions. European leaders reiterated their commitment to an inclusive political settlement under the framework of the Libyan Political Agreement (LPA), and support to Presidency Council (PC) and the Government of National Accord (GNA), headed by Prime Minister Fayez Sarraj, and backed by the United Nations. In this context, the EU welcomed the efforts of these bodies to restore prosperity, security and unified governance and recognized the PC and GNA as the sole legitimate authorities.

The Council also praised ongoing efforts to bridge political differences and make the Libyan institutions more representative, efficient and capable of delivering. The EU moreover pointed to the Libyan ownership of the political process and the importance of its inclusiveness, mainly through the continued participation of political and local actors, women and civil society. The EU also urged all political leaders to bear the responsibility for the wellbeing and security of their citizens and called upon Libyan actors to avoid actions that undermine the political transition in the country.

The Council also concluded that there can be no military solution to the conflict and urged all armed forces to unite under the control of the legitimate civilian authorities to ensure stability and preserve the country’s unity and territorial integrity. The EU therefore also welcomed the creation of the Presidential Guard and the recent deployment of its first units as a major step to protect the newly created institutions and diplomatic missions in Tripoli.

The EU has been significantly involved in the diplomatic work to facilitate Libya’s transition towards an inclusive and stable democracy since the popular uprising in 2011. The bloc provides support to the political transition, bilateral assistance including humanitarian aid as well as support through its Common Security and Defense Policy (CSDP) missions and operations especially EUNAVFOR MED Operation Sophia.