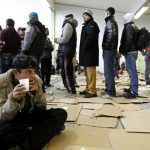 The Maltese presidency said that the EU should pay more to return African migrants home from Libya. The bloc’s current president says that Brussels should step up funding for the United Nation’s migration agency to return migrants stranded in Libya to their home countries further south in Africa. Italy and Malta bear much of the immediate burden of dealing with African migrants who leave Libya on dilapidating vessels. Between 2014-2016, about 1.6 million refugees and migrants reached Europe via the Mediterranean. Malta’s proposal comes ahead of a summit of the EU’s 28 leaders next week that will discuss putting into practice deals on new steps to stem African immigration.
The United Nations’ International Organization for Migration (IOM) estimates that there are currently around 700,000-1,000,000 migrants in Libya. The organization helps 7,000 people stranded in the country to go back home this year, which means more than doubling of its return program from last year. Brussels promised to provide more financial assistance. However, the Maltese plan calls for “significant increase in the number of migrants accepting voluntary returns to their country of origin beyond the current target of 5,000.”
During a February meeting in Malta, the EU promised support to the UN-backed government in Libya to help stabilize the country as well as curb migration from the coast. The Libyan government is, however, afraid that if the strategy succeeds and their exit towards the old continent becomes more difficult, the country might witness a growing migrant buildup. Tripoli has therefore asked the bloc to beef up Libya’s southern border and help return the people trying to get to Europe. Under the IOM program, charter planes taking off from Tripoli have already returned 589 migrants so far this year, mainly to Senegal and Nigeria. For the most vulnerable of the migrants, the IOM offers additional help to let them get started back at home.