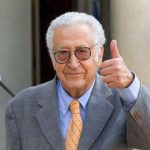 European leaders and civil society representatives failed to use the keywords such as “Iraq” or “Islam” while discussing the Union’s approach to the refugee crisis and relations with its neighbors, Lakhdar Brahimi, former UN Special Envoy to Syria, said. Mr. Brahimi called on his audience in Valletta, Malta, on Monday (27 February) to look at the root causes of the refugee crisis, which was, in his opinion, brought about by destructive Western policies in the region.
Mr. Brahimi was discussing the issue together with the Maltese presidency and representatives of the Jacques Delors Institute. However, under Chatham House rules, speakers mostly talked about the EU’s response to the refugee crisis rather than its underlying drivers. Mr. Brahimi argued that one important principle in international affairs was that “if you can do no good, at least do no harm” and openly argued that the EU had not respected this principle.
“If not the Europeans, at least the Western world hasn’t. Iraq has been invaded and destroyed by the Americans, with the complicity of at least one major European country and one major personality. Iraq was destroyed completely and it will take a very long time before it will be revive again,” he said and stressed that “I don’t think that the Americans and Mr. Blair went to Iraq to hand it to Iran, but this is what they have done.” Mr. Brahimi also described Iraq as the EU’s neighborhood. “The word Iraq was not used this afternoon. But Iraq is your neighbor. If we talk security and migration, the majority of migrants come to Europe from Syria, the second largest group comes from Afghanistan and the third from Iran,” he said.