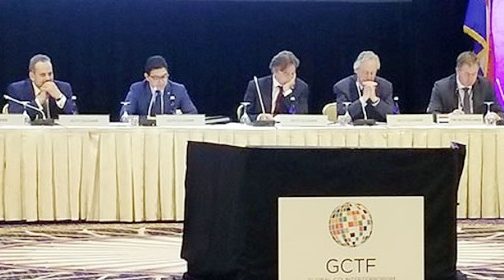 Morocco outlined a comprehensive and multilayered strategy to counter terrorism and Islamist threat at a meeting of the Global Coalition Against Daesh, held on the sidelines of the 72nd General Assembly in New York. The success of the North African country’s anti-terrorism strategy draws on the comprehensive strategy by King Mohammed VI with focus on the values of tolerance and coexistence inherent to Islam. The meeting was an opportunity to commend the Morocco’s King for his vision and leadership to tackle extremism notably through providing the training of Imams in line with Islam’s genuine values and extending this experience to African and European states.

Morocco’s Foreign Minister Nasser Bourita emphasized that the participants took stock of the Coalition’s strategies against Daesh, noting that 85% of Iraq’s territories were liberated from the grip of Islamists, while 57% of the once Daesh stronghold of Raqqa in Syria has also been cleared of Islamist fighters. Mr. Bourita stressed that Morocco advocates action against all resources of the Islamic State with a special focus on online propaganda. He also reminded of the still present danger of returning foreign fighters and sympathizers who are willing to serve Daesh’s destructive agenda.

The Global Coalition Against Daesh was formed in September 2014 and its 73 members are committed to tackling Daesh on all fronts including the dismantling of their networks and the countering of their global ambitions. Beyond the campaign in Iraq and Syria, the Coalition is committed to preventing the flow of foreign terrorist groups, tacking the group’s financing and economic infrastructure, and supporting stabilization and restoration of public services to areas liberated from Daesh.