Saving the Stranded in Libya: African and EU Leaders Speed Up Repatriation 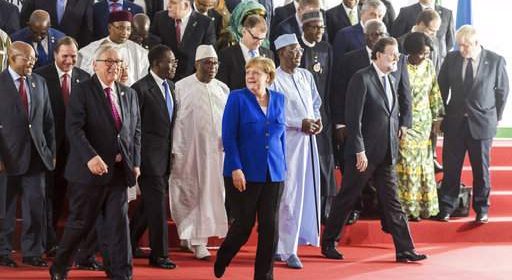 African and European heads of state made a joint decision to speed up the efforts to repatriate thousands of migrants stranded in Libya, some of them living in dire conditions. About 80 EU and African leaders ended two days of negotiations in Ivory Coast, pledging to step up their action against human trafficking and reports of slavery.  They announced they would repatriate about 3,800 migrants in one camp near Tripoli as soon as possible. Yet, African Union officials say that there are nearly 42 camps across the country, lodging about 700,000 people.

French President Emmanuel Macron called slave trade a crime against humanity and added that human traffickers were “deeply linked” to jihadist groups and extremist networks across northern Africa. Nigerian President Muhammadu Buhari said it was horrendous that “some Nigerians were being sold like goats for a few dollars in Libya.” He added that all Nigerians stranded in Libya and other countries around the world would be brought home and “rehabilitated.”

Libya is the “stepping stone” for many Africans trying to reach Europe, hoping to flee low security, threat of terrorism and poverty at home. Thousands lose their lives every year, attempting to make the dangerous journey across the Mediterranean Sea. The EU and Libya are working to discourage such hazardous trips, including cracking down on human traffickers who often leave their cargo stranded at sea. According to the International Organization for Migration (IOM) and the UN Refugee Agency, about 244 million people now live outside the country they were born in – up from 152 million in 1990. More than 65 million people have been forcibly displaced due to conflict, persecution, or natural disasters.